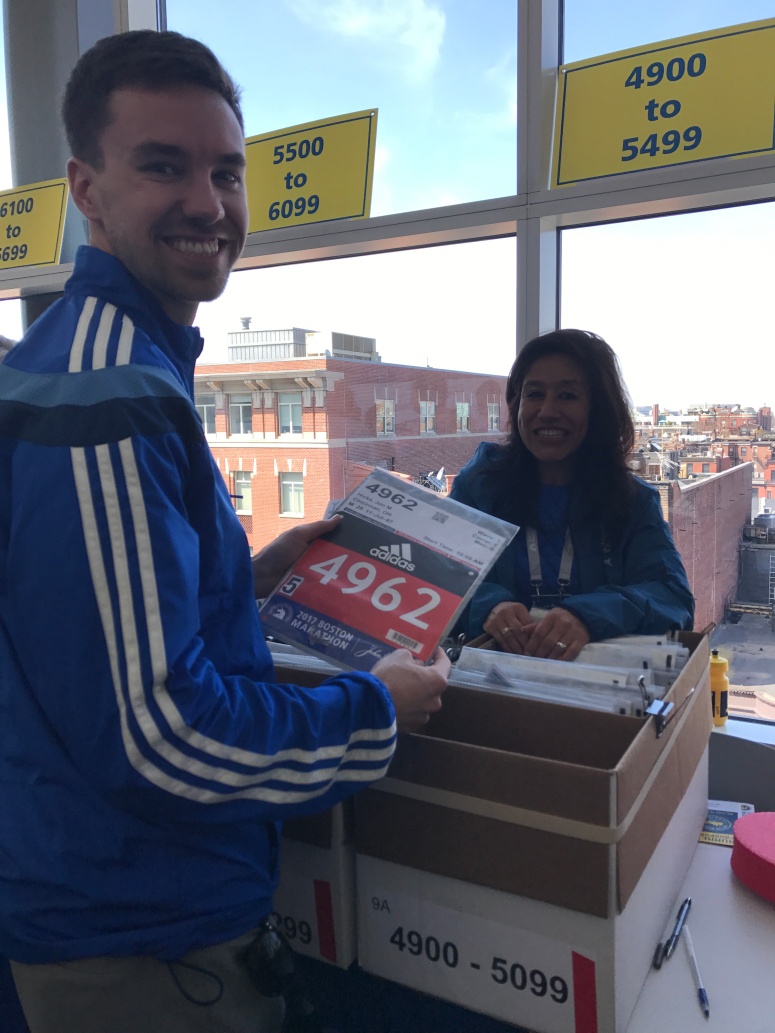 I should probably title this post, How NOT to spectate Boston. I felt like Murphy’s Law was very true on Marathon Monday 2017!

Let me set the stage: Jon’s parents moved to Seattle several years ago so I had only met them ONE time before they joined us for this weekend in Boston. They had never spectated a race before, definitely not a marathon! So this was going to be the first day I spent alone with them (for most of the day) and my stress level was already through the roof with the weather forecast for the day looking like it was going to be a hot one.  I hope Jon makes his way back to Boston one day so I can have a spectator do-over! (Personal goal is that I can make it to Boston someday and Jon will have all the tools he needs to have a better spectating day!)

Looking for a Christmas present for your runner? The official Adidas Boston jacket is typically released early December. It is expensive but I would recommend buying it ahead of time so you don’t get to the expo and find they are all out of your runner’s size.

In terms of trip planning, I make reservations at several restaurants prior to our trip so that we could ensure smoother dinners and this allowed me to make sure the place we would eat Sunday night had adequate pre-race meal options. Figure out if you are going to participate in the past dinner hosted by BAA and what else in Boston you would like to take in!

Hotels in Boston are EXPENSIVE! We ended up staying at The Bostonian and it was perfectly located to Boston Commons, Faneuil Hall and several T stations. We made reservations as soon as Jon unofficially qualified (the second time). Be sure to check out the hotel’s cancellation policy and also mention that you are running Boston in case there is a special rate.

It is apparently a thing to get a picture picking up your Boston bib! Get in there and take that picture. The volunteers are lovely and likely expecting it!

The Expo was very crowded at first; however, if you can get through the Adidas booth madness, things will thin out. Jon’s parents said they would meet up with us after we were done when they saw how crowded it was there. It was a fantastic expo and I wished we would have spent more time there! 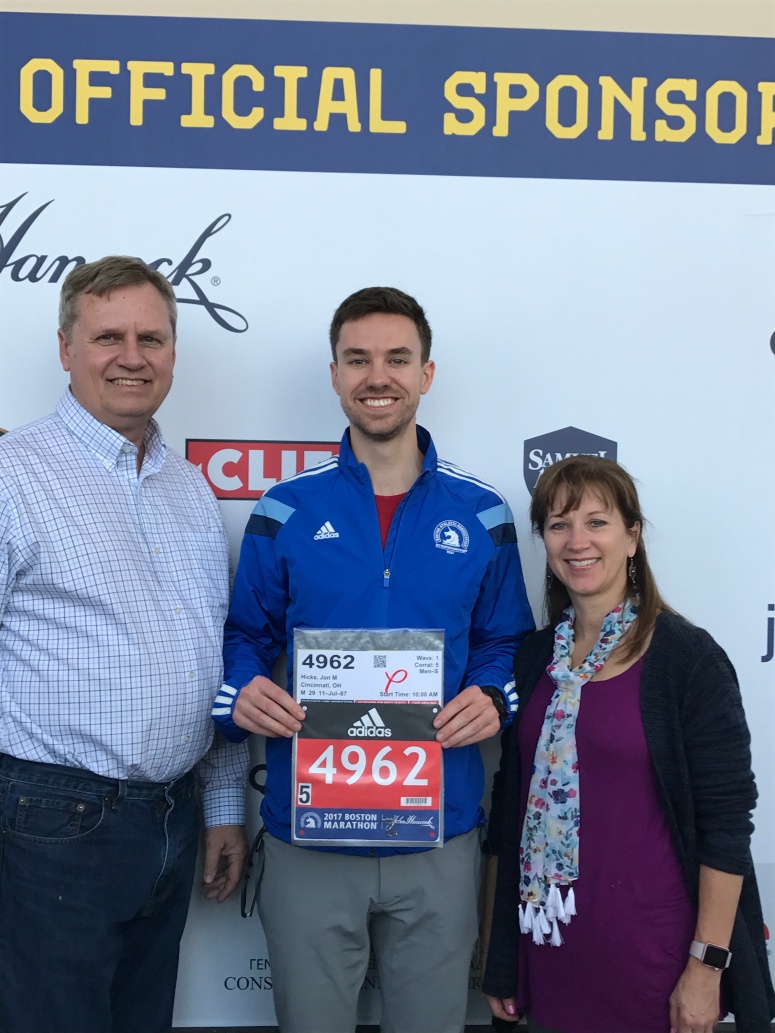 Boylston Street is crowded but you likely won’t be there to see your runner cross the finish line so you might as well go have them pose for pictures EVERYWHERE on Boylston the day or two before! You might even run into some of the pros there (MEB!!!!!)

If your runner takes a shake out run, go with them if you can! This way, you can identify your post-race meeting spot, scope out where the buses will load up the athletes, etc. Be sure you are familiar with which T station you will be using and going over the standard pace plans.

Your runner will get mail, email, etc. with instructions on race morning. I would set a few extra alarms that morning so that they do NOT miss the bus! Be sure they pack morning clothes because they will be on the buses early and have a LONG time before they actually start the race. The last thing you want is for them to be cold for hours and then run 26.2. All of the clothes are donated so it is a good chance to get rid of some extra running clothes hanging around! I woke up and walked with Jon over to the buses in the morning. I enjoyed having a few minutes to ourselves before the race.

After getting Jon on the bus, I walked back to the hotel and stopped for coffee & a quick breakfast before going up to check on Jon’s parents. The three of us made our way to the subway station around 0730 to avoid crowded cars getting out to the race course.

We took to Green Line out to Woodlawn and then walked quite a bit to be around mile 15.5. This isn’t something I would do again; however, there was a Dunkin Donuts (like there is on every corner in Boston) and a few other little shops the further you walked from the T station. This was nice for breakfast. Next time, I would stay closer to the station but we did have a nice spot where Jon could easily find us.

After seeing Jon (and seeing that he was struggling) I abandoned my plan to just see him at mile 23/24 and hopped on the Green line to Resevoir (mistake #1). Resevoir is very close to the race course; however, it was not timed well to be able to get another train back quickly towards Boston because the station we needed was on the other side of the course (Cleveland Circle). So we saw Jon, he did not see us, and we started walking. I knew with his parents’ pace that we wouldn’t be meeting up until hours later so I panicked and gave my backpack (with my T card and dead phone inside…. mistake #2) to his mom and started running in my Keds (mistake #3). Thankfully, I was training for my half marathon at the time so being 6 miles from the finish line wasn’t a big deal and I calculated Jon would only beat me by 10 minutes. As I continued getting closer to the finish line, security got tighter and I was stopped multiple times despite only having my phone to be checked. I came to a T station that had a train coming soon but I didn’t have my card or any money, so I kept going! I gave up on this huge line that was allowing spectators onto Boylston and asked a police officer the best way to Boylston and Arlington (Mistake #4). I continued running, in the WRONG DIRECTION. Thankfully had Jon’s phone and was using Google maps (Mistake #5). I was clearly lost at this point. I called an Uber and was crying in the backseat asking him to get me as close to Boylston and Arlington as possible. Remember when I said you shouldn’t expect to use your car on Marathon Monday? When I finally got somewhat close and re-oriented in the right direction, I ran to our meeting spot where I found a depleted Jon who had been waiting 45 minutes after he finished his hardest marathon yet.

That was the worst spectating experience I have ever had! I learned a lot of lessons from my mistakes!  Spectating in Boston is already complicated compared to other mrathons or triathlons due to the point-to-point course.

Boston is quite the experience. With proper planning and research, you will have a fantastic time spectating!

Despite a poor spectating day on my part, it was amazing to see the pros race and how the city truly comes together. Boston Strong is so much more than words.

Check out my next post about the good food spots in Boston and things to do!