Ironman Texas is held in The Woodlands, a suburban town approximately 45 minutes from downtown Houston. This area is pretty commercialized with many chain restaurants and shopping areas. As you’ll come to learn, Jon & I love finding those mom and pop places whenever we can but race weekends tend to limit our adventurous spirits a bit as we try to find “normal” food.

This is our first traveling race since Jon changed to a primarily plant based diet, which I mostly join him in. Finding anywhere to eat that has more than a veggie burger as an option has been a source of stress even in our own town, so I spent more time than normal researching for this weekend!

Wednesday, day 1: We took an Uber from the airport to our hotel to find the Embassy Suites at Hughes Landing hosted happy hour daily from 5:30-7 where each guest got three free drinks as well as quite the spread of apps set out. Since neither of us drink frequently, we only used one drink the whole time but what a deal! We took the free Woodlands trolley from outside our hotel to the Waterway and Market Street. The trolly was fantastic free public transportation! I had packed a printed map with us but the route was rearranged given the Ironman weekend so it wasn’t all that helpful. Dinner was at Schilleci’s New Orleans Kitchen at Market Street. Delicious & we ended up getting beignets for dessert that were only second to Cafe du Monde’s!

Thursday, day 2: The breakfast at Embassy Suites ended up being a great option that we took advantage of daily. Today was all about athlete check in, athlete briefing and bike tune up. We met up with Mike and had lunch after the athlete briefing at Cyclone Anaya’s along the Waterway. I had the greens salad and the guys had tacos. Maybe 30 minutes after getting back to our hotel, I knew something just wasn’t right and ended up spending the rest of the day in the bathroom with what I imagine to be food poisoning. That was basically the rest of my day. Jon is a champ and stuck it out with me, ordering pizza from California Pizza kitchen since it was only leaving me alone for a few minutes while he went to pick it up. He said it was pretty good though! I am attributing it to the romaine lettuce scare going on at the same time. Neither of the guys had any symptoms.

Friday, day 3: Being back from the dead, Jon & I went to the practice swim which was only a short walk from our hotel. The rest of the morning, the guys rode and ran before getting bikes to gear check. Lunch came from Whole Foods since that was going to be the “big meal” of the day. Pre-race dinner also came from Whole Foods, though we were pretty disappointed there weren’t many different meal options for dinner.

Saturday, day 4, RACE DAY!: Spectator eating is always hit or miss. I packed as many bars and snacks as I could carry in my bag but I don’t think I really ended up eating much. Post-race, we headed back to Hughes Landing where we ended up going to Local Pour for dinner. They initially told us it would be over an hour and a half wait for dinner but then we learned the high tops were self seating, full service and we sat down right away! I had a mushroom burger and it was pretty good! The rest of the table’s food was devoured quickly. Definitely get the pretzels, the pickled okra and the chicken tenders! All crowd pleasers though no one had anything negative to say about their meals.

Sunday, day 5: Breakfast at the hotel again before we ended up going to the Marriott at the Waterway for the Athlete Awards and Volunteer Appreciation banquet. The food was lunch instead of a brunch spread but decent none the less! After the banquet, we ended up trying to go downtown to Houston but the first Uber driver we had made us get out of his truck when we said where we were going! After a few attempts of trying to get another driver, we ended up getting a great driver and headed down to Discovery Green. We walked around downtown, stopped in Phoenicia Specialty Foods, which wasn’t as exciting as what I had read about– I would skip though we did get waters! We continued walking until we got to Main Street. For a weekend, it was pretty bare. We ended up getting some vegan queso and vegan carrot cake at Local Foods, walked to Market Square Park (we missed the chef competition that had happened earlier in the day), grabbed a beer at The Conservatory (definitely recommend stopping here!). We weren’t necessarily dressed for a nice restaurant but we wanted to go to Xochi, Hugo’s or Caracol for dinner. We were a little too far from any of these and I couldn’t ask my Ironman to walk too much further one day after the race, so we walked around Buffalo Bayou and decided on La Fisheria for dinner. We finally remembered all of the damage from Hurricane Harvey when our waitress told us they just reopened two weeks prior. We had Tostada de Atun, chips, salsas and pulpo a la parrilla (octopus). While I was still regaining my appetite, Jon was really impressed with everything! We caught an Uber back up to The Woodlands and called it a night.

Monday, day 6: Our last day! We had our usual hotel breakfast, walked around Hughes Landing to do some shopping (which primarily consisted of getting coffee and macarons as there isn’t too much up there). Spending the day poolside was initially our plan but the weather was slightly too cloudy for it so we ended up renting bikes from the bike share (cost $5/each) and taking them over to Crave cupcake shop. We have had better for sure but it was something to do! We came back to check out and had the hotel hold our luggage while we took the trolley back to the Waterway for some shopping and early dinner before leaving for the airport! We settled on Zoe’s kitchen which was a delicious Mediterranean fast-casual joint. The baked falafel was on point! We stopped at the Nestle Toll House shop, which was Jon’s post-race pick for dessert but it fell flat compared to freshly baked cookies! We headed to the airport afterwards and were on our way back to Cincinnati.

Overall, I didn’t get the “foodie” city vibe but did enjoy dinner at Schilleci’s New Orleans Kitchen. I wished we would have had better recommendations about where to go and what to do in Houston because we clearly didn’t pick the best spot to explore by foot. Next time, I think I would check out Montrose or Midtown instead! The MoBike bike share in The Woodlands is definitely worth checking out! Seemed a bit silly since we had Jon’s tri bike in tow but it was nice from a spectator perspective. You can literally park your bike anywhere and use the app to locate bikes nearby!

Happy adventuring and spectating! Be sure to check out my race guide on IMTX! 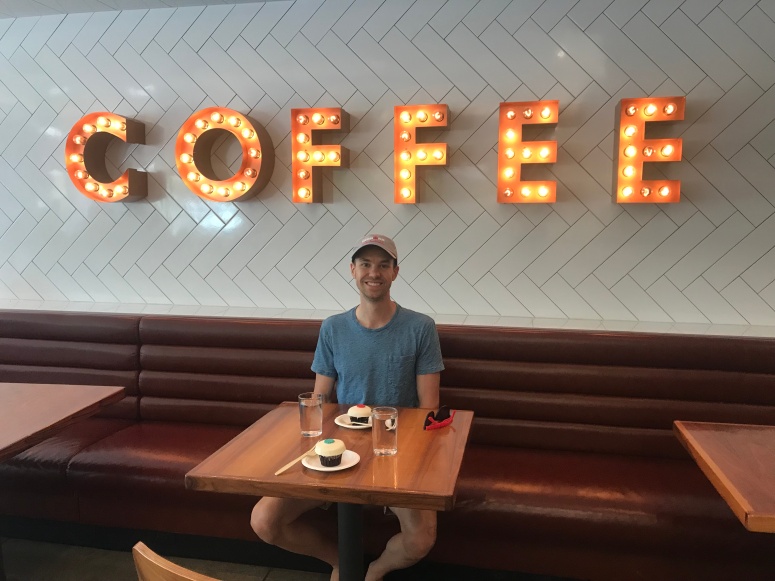